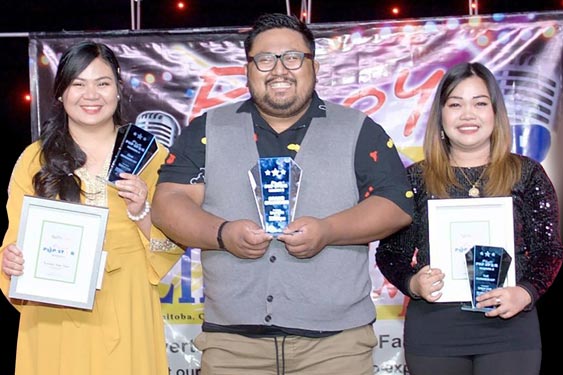 Jesse James Baris was named Champion in the Grand Final of the Pinoy Pop Star Season 5 singing competition on Friday, August 26, 2022. After a delay of two and a half years since the semi-final phase of the contest in January 2020 – due to the COVID-19 pandemic – fourteen excellent singers from Winnipeg’s Filipino community performed to another sell-out house at the McPhillips Station Casino.

Baris, an active member in the performing arts community and local community centres, runs his own glee club while working as a store manager and working in the promotions department at a local radio station. He took the top prize of $2000 and the Grand Prize trophy with his performance of Simon and Garfunkel’s Bridge Over Troubled Water.

Joy Reyes placed second with a prize of $750 and a trophy for her powerful rendition of the OPM song Luha by the band Aegis.

Keesha Mae Mari sang the inspiring song The Impossible Dream from the musical Man of La Mancha to win third place with a prize of $500 and a trophy.

Pinoy Pop Star Season 4 Grand Champion, Klayd Gatdula returned for a guest appearance after the intermission with two moving songs, Stay With Me and All of Me.

Throughout the semi-final, which took place in January 2020, and grand final levels of Pinoy Pop Star, the singers were judged on technical as well as artistic criteria. As emcee Lucille Nolasco Garrido explained to the audience, the judges were directed to score each singer between a minimum of 30 per cent and a maximum of 60 per cent for technical merit, and between 20 per cent and 40 per cent for artistic merit. The technical component encompasses voice quality, tone, pitch, voice dynamics, and rhythm and timing. The artistic component includes interpretation, style, stage presence, confidence, originality, and creativity.

Thanks also to our official photographers, Arnel San Jose and Alex Canlapan.