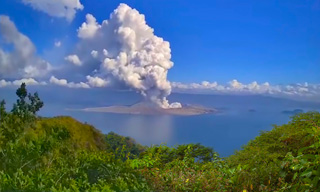 Taal volcano, which sits on an island surrounded by a lake in Batangas province, had a minor eruption on March 26, sending ash and steam hundreds of meters into the sky. The eruption was phreatomagmatic, meaning molten rock came into contact with underground or surface water, said state volcanologists of the Philippine Institute of Volcanology and Seismology (Phivolcs). Taal is one of the world’s smallest active volcanoes.

As of March 30, volcanologists have allayed fears of a major eruption but continue to monitor the restless volcano.

Based on Phivolcs’ seismic records and cameras, the activity at the main crater was dominated by the upwelling of hot volcanic fluids in Taal Lake, which generated plumes 1,000 metres high that drifted southwest. This “magmatic unrest” prompted the agency to declare an Alert Level 3 and immediately order the evacuation of more than 1,100 persons living in lakeside communities near the volcano.

The agency’s chief, Renato Solidum, said the activity was weaker than in January 2020, when Taal expelled ash 15 kilometres high and spewed red- hot lava, devastating hundreds of homes, killing livestock, and sending thousands of displaced people into shelters. Solidum said there was no potential of a large explosive eruption similar to the 2020 eruption as of now. “Not yet, but we have to constantly monitor the volcano in more detail. If there will be more explosions, it will enhance the deep magma to rise.”

Phivolcs warned that entering Taal Volcano Island, especially the vicinity of the main crater is strictly forbidden. The island is deemed a permanent danger zone. Boating and other activities on Taal Lake are also prohibited. Local government officials have been advised to constantly assess and reinforce the preparedness of previously evacuated barangays around Taal Lake in case of renewed unrest.

Located in the province of Batangas, the volcano is about 50 kilometres south of Manila. It is one of the most popular tourist attractions in the Philippines. Despite standing at only 311 meters (1,020 feet), it can be deadly. It is the second most active volcano in the country with 38 recorded eruptions. Several violent eruptions in the past have caused deaths on the island and the populated areas surrounding the lake, with an overall death toll of about 6,000. Because of its proximity to populated areas and its eruptive history, the volcano was designated a Decade Volcano, worthy of close study to prevent future natural disasters.

Taal Volcano is part of a chain of volcanoes lining the western edge of the island of Luzon. All volcanoes in the Philippines are part of the Ring of Fire.