Astrid and Lilly Save the World is a new TV series that premiered on January 26. The series focuses on high school outcast BFF’s Astrid and Lily who accidentally crack open a portal to a terrifying and quirky monster dimension. It’s up to this monster fighting duo to vanquish the creepy creatures, save the world, and survive the horrors of high school.

One of the stars of Astrid and Lilly Save the World is Jana Morrison, a Filipino-Canadian multidisciplinary artist who grew up in Winnipeg. A graduate of Sisler High School, she left Winnipeg in 2010 to study at The Canadian College of Performing Arts in Victoria, BC. Eight years later, her parents, Gerry and Rebecca Morrison, the original owners of the popular Supreme Ice Cream shop in Winnipeg, also left Winnipeg to be closer to Jana in Vancouver.

Jana is now based in Vancouver where she has been recognized for her work in the British Columbia arts community. She was awarded the Pro-Art Early Career Artist Award in 2020. Jana also worked on NBC’s Zoey’s Extraordinary Playlist and Hallmark’s Master of the Heart and Chesapeake Shores. 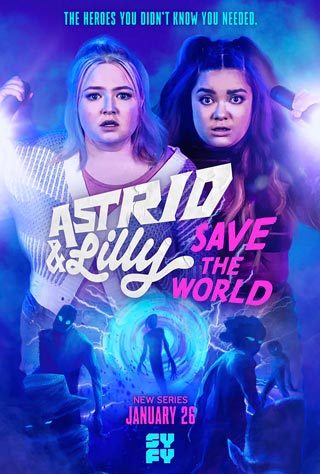 Pilipino Express recently caught up with Jana Morrison after the January launch of her new series, Astrid and Lilly Save the World.

Pilipino Express (PE): Congrat-ulations, Jana! Can you give us a sense of how you’re feeling these days now that you’re playing one of the leads in this series?

Jana Morrison (JM): Since I found out I’d be starring in the series, throughout filming and now as it’s being released into the world, I have felt more and more gratitude for this opportunity. I’m so thankful to all the people who helped me on my journey, especially Joy Lazo and Joseph Sevillo from the Filipino performing arts community here in Winnipeg for all of the encouragement they’ve given me. I’m feeling a sense of pride to represent for Filipinos and for plus-size people. I have worked my way to get to the place I am now. And to quote Shania, “Up, up, up. Can only go up from here!”

PE: How do you describe your role in this series?

JM: I play Astrid, a 16-year-old Filipino girl who loves science, everything 90’s, and hot men. She is confident, curious, and she depends on her ride-or-die bestie named Lilly, who has been her best friend for years. The girls are bullied for their weight, for how weird they are, and for spying on the cool kids. One night they are bullied so much that they burn a bunch of objects and yell out into the universe, just for fun, to get out the horrible feelings caused by the bullies. By doing this ritual, the girls accidentally open a portal to another universe where monsters have crossed into our human dimension. These two girls have no idea how to slay monsters and survive high school, but it’s up to them to use the skills they have been acquiring over the years to save the people in their community.

PE: Does this experience give you the opportunity to hone your talent to prepare you for other challenging roles in the future?

JM: This experience has been a wonderful opportunity for me to use all of the skills that I have been working on over the years. Although I had not had the opportunity to play a lead role in a series before, I was ready to spend seventeen hours on set at a time, get new lines to learn at the end of every day, and deliver a strong performance at any hour of the day. Now that I’ve spent four months making the first season of Astrid and Lilly Save The World, I know even more about how much discipline, preparation, and emotional work it takes to be a lead actor and I’m ready to conquer more!

JM: Astrid & Lilly Save the World will continue airing on Wednesdays until the season finale on March 30! I don’t have any projects coming up right now, but I have a great manager here in Canada at Cue Management and have just signed with the Agency for Performing Arts in the United States!

PE: Thank you and we wish you all the very best, Jana. We are very proud of your achievements, and we look forward to covering more of your film projects in the future.

Astrid & Lilly Save the World is now streaming on CRAVE TV and CTV Sci-Fi Channel. In the US, it is streaming on SYFY and the USA Network.