MANILA – With world leaders holding a summit to agree on how to fight the climate crisis, an international environmental group is pointing out the obvious and how it is “particularly insulting” that one of the world’s biggest single-use plastic polluters is among its principal partners.

“Given that 99 per cent of plastic is made from fossil fuels, and that the fossil fuel corporations are actively shifting their focus to plastic as an increasing source of revenue, Unilever’s role in COP26 is particularly insulting,” said environmental group Break Free from Plastic, a coalition of more than 11,000 organizations and individual supporters.

In the Top 10 Corporate Plastic Polluters of 2021, Break Free from Plastic said Unilever landed third in their efforts to count and document plastic waste from a total of 440 global clean-up events in 45 countries.

Phasing out of single-use plastic is among the calls of environmental groups in the United Nations Framework Convention on Climate Change 26th Conference of the Parties or the COP26, which concluded November 13. Environmentalists and human rights activists have earlier held side events and protest actions in Glasgow, Scotland to demand grassroots solutions to the ongoing climate crisis.

The COP26, they added, is dominated by big economies and corporate interests.

“The plastic crisis’ connection to the climate emergency and environmental justice impacts are undeniable. The cost of the continued dependence by corporations on single-use plastics and planned expansion of plastic production are too high to be ignored,” a joint statement of Break Free from Plastic and 56 other environmental groups read.

Pledges have little impact so far

Citing the case of Coca-Cola, the beverage company has earlier pledged to collect one bottle for every one sold by 2030.

Coca-Cola, in a statement issued along with other multinational companies, said they aimed to “build a world without waste.” This includes making packaging 100-per cent recyclable by 2025 and to work with stakeholders, non-profits, communities, governments, and industry partners to recycle and reuse.

However, this year’s audit still showed that Coca-Cola products still topped the list and had more trash than the next two top plastic polluters combined. This has been the trend for Coca-Cola since 2019.

The same went for PepsiCo, which is still one of the top three plastic polluters for the past three years. This is despite the company’s recent commitments to halve the use of virgin plastic by 2030.

This goal is said to be executed through scaling new business models and reducing absolute tonnage or virgin plastic derived from non-renewable sources.

“PepsiCo will need to make a more ambitious shift to reusable containers in order to move down the list, given the sheer volume of PepsiCo branded plastic pollution being collected around the world,” said the BFFP.

Why phase out single-use plastic

Both Greenpeace and BFFP said plastic is a threat to the planet and contributes significantly to the climate crisis.

“Every stage of plastic’s life cycle produces greenhouse gas (GHG) emissions from fossil fuel exploration and extraction from the ground to its end of life. Plastic production and use were responsible for over 850 million metric tons of GHG emissions in 2019,” they added.

Apart from fueling the climate crisis, the groups pointed out that plastic harms wildlife and disrupts ecosystems. As it stands, the United Nations Environment Program said in a report that plastic pollution has affected an estimated 800 marine and coastal species through ingestion, entanglement, and habitat change.

“Plastic surfaces or particles can carry disease-causing organisms, cause inflammation, and traverse highly selective membranes in animals. Plastics also threaten soil fauna functions and can leach toxic additives into the soil and groundwater, some of which can disrupt the hormone systems of vertebrates and invertebrates,” they explained.

Plastic, too, poses several health risks to people – from its production to disposal as they are exposed to hazardous chemicals during extraction, toxic emissions during production, and pollutant contamination.

“In the Global North, petrochemical refineries which produce components of plastics, and incinerators which burn them, are usually near communities of color and low-income areas. These communities suffer immediate health impacts such as asthma, cancer, and mental health disorders,” they said.

These effects mirrored what was seen in the Global South where poor communities residing in the vicinity of landfills are faced with increasing plastic pollution because of illegal imports from high-income counties. This leaves people vulnerable to various health risks brought by air pollution.

While it is necessary to put a stop to the long-enduring environmental crisis around the globe, organizations and defenders were quick to point out that band-aid solutions do not make the situation any better.

“For decades, the plastic industry has worked alongside fossil fuel corporations to present false solutions that allow both to continue with business-as-usual and produce more and more plastic while largely evading their responsibility to prevent this problem,” they noted.

The industry’s most recent strategy is ‘plastic neutrality,’ a term adopted by companies such as Nestle and Nutri-Asia. The groups explained, “Plastic neutrality does not mean companies produce zero or less plastics, but that they will collect the same amount of plastic they produced themselves or via offsets, a strategy that does nothing to address plastic pollution.”

Waste-to-energy plants, which were being passed off as renewable energy sources, were also given a thumbs down as “these waste-burning plants are not only inefficient and non-renewable but are also highly polluting and harmful to human health.”

The group cited a statement by the US Environmental Protection Agency which listed WTE facilities as major sources of mercury and dioxin emissions.

They added, “These chemicals are carcinogenic substances that also result in developmental issues, immune system dysfunction, and internal organ damage. WTE also requires a huge volume of waste in order to operate, encouraging a society that produces more waste.”

Lastly, bioplastics were pointed to give industries license to continue using disposable plastic products and do not resolve issues related to the throwaway culture.

“Designed to be disposable, bioplastics mass disposability is as wasteful, resource-intensive, and unsustainable as regular plastic. Relying on bioplastics may also lead to exploitation of regulatory loopholes for biodegradables, false marketing or improper labelling, and unintentional pollution.”

To phase out single-use plastics, the organizations appealed to consumer goods companies to urgently act on the intensifying effects of the plastic crisis.

“Urgently begin the phase-out of all single-use plastic packaging and products in their operations. Implement a just transition to affordable and sustainable plastic-free systems, including prioritizing the adoption of reuse and refill systems. Promote accountability by showing full transparency about their plastic footprint, and the environmental, public health, and climate impact of their packaging,” they ended. (JJE, RVO)

The author, Dawn Cecilia Peña, is a fellow in the 2021 GAIA-BFFP Asia Pacific Media Fellowship – Philippines. Article courtesy of Bulatlat.com 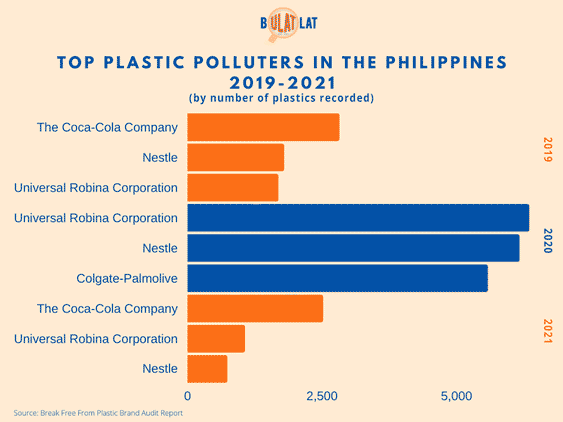 Leading plastic polluters in the Philippines, according to Break Free From Plastic (Graphics by Dawn Cecilia Peña / Bulatlat)