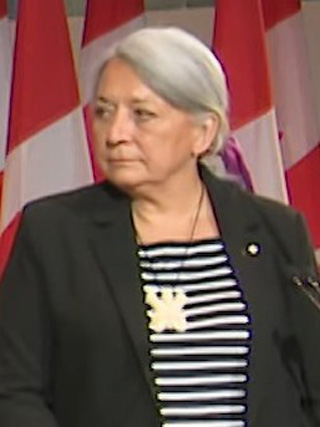 Prime Minister Justin Trudeau announced on July 6 that, on his recommendation, Queen Elizabeth has approved the appointment of Mary Simon as the next Governor General of Canada.

“I am very pleased to announce that Her Majesty, the Queen, has graciously approved the appointment of Mary Simon as the next Governor General of Canada. Ms Simon has dedicated her life to advancing social, economic, and human rights issues for Canadian Inuit and Indigenous peoples, and I am confident that she will serve Canadians and promote our shared values with dedication and integrity. Through this appointment, we are ensuring that Canada is represented by someone who exemplifies the very best of our country. I also join Canadians in thanking His Excellency, the Rt. Hon. Richard Wagner, for serving as the Administrator of the Government of Canada the past few months,” said Prime Minister Trudeau.

Throughout her distinguished career, Simon has been a tireless advocate for Inuit rights and culture, and the rights of all Indigenous peoples. Over four decades, she has held various senior leadership positions, including President of Makivik Corporation, where she helped to protect and promote Inuit rights through the implementation of the James Bay and Northern Quebec Agreement. She also served two terms as President of the Inuit Circumpolar Conference, now known as the Inuit Circumpolar Council, and as President of Inuit Tapiriit Kanatami.

As the first Canadian Ambassador for Circumpolar Affairs, Simon played a leading role in strengthening the ties between the people of the Arctic regions nationally and internationally, including through the creation of the Arctic Council. She is also the founder of the Arctic Children and Youth Foundation, and has served as he Ambassador of Canada to Denmark.

The role of Canada’s Governor General

As a constitutional monarchy with a parliament comprised of the Sovereign, the Senate, and the House of Commons, Canada’s form of government is among the most stable and enduring in the world. With an evolving role that predates Confederation, the Governor General acts on behalf of the Sovereign, Canada’s Head of State.

The Governor General’s responsibilities include carrying out constitutional duties, serving as commander-in-chief, representing Canada at home and abroad, encouraging excellence, and bringing Canadians together.