PHILIPPINES – The smallest whale shark ever found has been rescued from a hawker in the Philippines, shedding new light on the breeding habits of the biggest fish in the sea.

Scientists are celebrating the discovery of the 38-centimetre (15-inch) baby whale shark - the tiniest living example of a species that typically grows to be as big as a bus. If all goes well, the docile little creature in the photo will one day measure 40 feet and weigh about 15 tons.

It definitely has a new lease on life after it was found Friday, March 6, 2009 with a rope tied around its tail, secured to a stick poked in the sand in a coastal town of Pilar near Donsol in Sorsogon province. 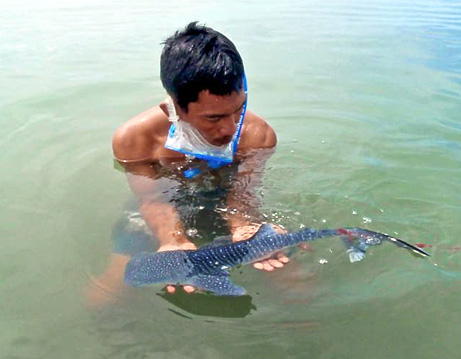 The environmental group World Wide Fund for Nature (WWF) Philippines through its chief executive, Jose Ma. Lorenzo Tan, says the Pilar “pup” was so small, it was probably born in the Philippines and could have been what biologists call a neo-nate (new born).

“In spite of all the research that is being done worldwide on whale sharks, to this date no one knows where they breed or give birth,” said Tan.

He added, “Not only is this animal the smallest live whale shark on record ever to be captured and released here in the Philippines (and arguably, anywhere in the world), it is also the first indication that the Philippines, at the apex of the Coral Triangle, is probably one of the places on the planet where these giants of the sea are born.”

For many years, scientists thought that Donsol was merely a “gas station” along the global network of marine highways where whale sharks cruised.

The find is very significant for scientists, who know little about where the biggest fish in the ocean goes to give birth to its live young.

WWF said a hawker was allegedly trying to sell the fish in an area that sees the world’s largest known annual gathering of whale sharks. Whale sharks, which are harmless to humans, face a high risk of extinction, according to the International Union for the Conservation of Nature.

After checking to see the baby whale shark was unhurt, WWF, police and government officials measured and photographed it before releasing it in deeper water.