OFW remittances to the Philippines to fall in 2009

In its most likely scenario, remittances this 2009 will total only $15.4 billion compared to 2008’s $16.4 billion, a contraction of -6.17%. This is a marked turnaround from the significant +13.7% growth rate (or $1.97 billion) experienced in 2008 and the end of a multi-year of double-digit growth rates. Best-case scenario is pegged at zero-growth while the worst-case scenario is seen at a -11% decrease in remittances.

Badly affected would be remittances coming from the U.S. as OFWs based there contribute 48% of total remittances to the Philippines. Canada comes in third at 8% after Saudi Arabia with an 8.5% contribution. 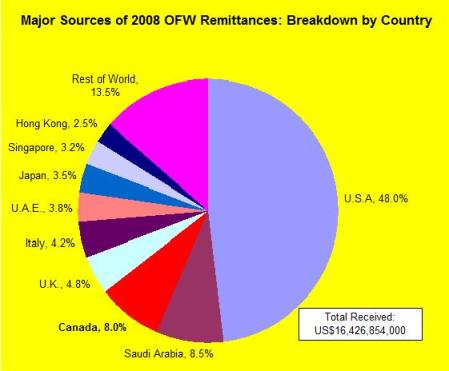 The slowdown in remittance growth began in the second half of 2008 and will continue into 2009 as the global economic downturn leads to further layoffs and pay cuts among Filipinos, most of whom are temporary migrant workers in some of the worst-hit industries: manufacturing, construction, trade and tourism.

The average remittance per OFW fell from $1,656 in 2007 to $1,626 in 2008 and will fall more sharply to only $1,467 in 2009. Deployment will decline by an average of 7% with layoffs, pay cuts and wage deferments most concentrated among guest workers in manufacturing, construction, and shipping (including passenger ships). Least to be affected are domestic helpers, caregivers, nurses and other professionals as these occupations are unlikely to see layoffs in a context of aging populations in the developed world and shortages of healthcare and other service workers in the booming Middle East. Continued high demand for these service workers will offset the decrease of Filipino workers in other occupations.

What the Philippine government has to say

Contrary to predictions made by international financial institutions, the Philippine government remains optimistic about the prospect for deployments and remittances in 2009, projecting remittance growth of 6-9% y/y at best in 2009 and 0% growth at worst. The optimism is based on POEA claims that net deployment will remain strong and that Filipinos are landing higher-paying jobs. POEA claims there are still 400,000 unfilled positions abroad for Filipino migrants and predicts only 50,000 Filipinos will be sent home this year due to layoffs.

Lower remittances and deployment in 2009 may decrease consumption and investment in the Philippines and increase unemployment. Families dependent on remittances will experience more hardship. The government has been providing financial assistance for laid-off workers, which may help tide them over the year. But a prolonged global economic slump may mean fewer contract renewals in 2010.