WINNIPEG – Manitoba Public Insurance (MPI) expects Manitoba drivers will collectively pay almost $11 million less in premiums if a new set of insurance rates is approved. MPI applied to the Public Utilities Board (PUB) on Friday, January 30 for new rates that will accompany a new system of merits and demerits designed to increase discounts for safe drivers while increasing penalties to reckless drivers.

“We’ve designed a system that can provide stronger financial incentives to drive safely, while making it easier to understand how the way you drive affects the amount you pay,” said MPI CEO Marilyn McLaren in a press release.

Currently, the maximum merits a good driver can earn is five, but under the new Driver Safety Rating system, the maximum will go up to 10 merits in the first year and up to 15 merits in five years. 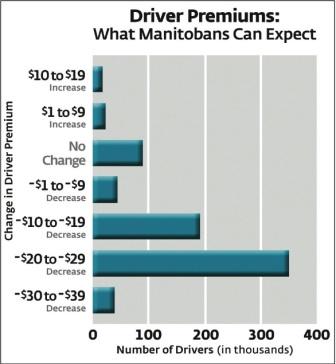 The safest Manitoba drivers will pay no driver premium, or five dollars if they don’t own a vehicle, compared to their current driver premium of $20. Conversely, dangerous drivers can expect to pay a lot more when new rates are phased in for them. Those penalties have yet to be set.

“As we increase the discounts for the safest drivers, we’ll also need to increase the penalties for those who persist in higher-risk behaviour. We want to ensure those drivers have a chance to improve their habits before higher penalties are introduced – so for the first year, we are proposing that no one will pay more, and the maximum vehicle insurance discount remain at 25 per cent. Within a few years, we expect to introduce higher discounts for safer vehicle owners,” said McLaren.

If approved, the new insurance rates will come into effect for Autopac policies and drivers’ licences renewed after November 1, 2009. MPI is asking the PUB to keep most rates about the same as, or slightly lower than, they would have been under the old system during a 16-month transition period.

Under the Driver Safety Rating system, minor accidents will cost drivers two merits out of a maximum of 15 while at-fault accidents mean a loss of five merits. Serious convictions such as impaired driving carry a penalty of 10 demerits. Extreme convictions such as dangerous driving causing death will cost a driver all 15 possible merit points and a driver premium even higher than $1,000 plus that bad drivers are already paying.