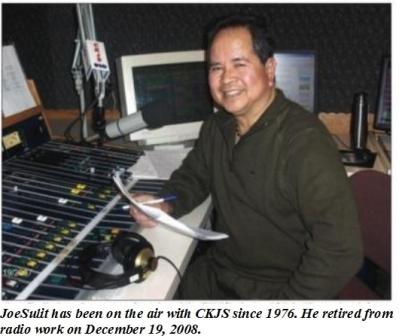 After 32 years on the air with Winnipeg’s CKJS Radio, Joe Sulit signed off for the last time on December 19, 2008.

Local Filipino-Canadian listeners will miss the voice of the jovial radio announcer who has been a part of their early mornings since the show Good Morning Philippines (GMP) debuted in 1989 with original co-host, Emmie Joaquin.

“I will miss radio… CKJS has been my second home for many, many years,” Joe remarked during the breakfast reception at the radio station after the morning show.

“The Filipino community in Manitoba was just beginning to grow at that time… the show aired only three times a week, Tuesdays, Wednesdays and Thursdays… the strange thing was that it did not even have a regular time slot on those three days… listeners had to guess when it was airing,” laughed Joe as he recalled his early days broadcasting on CKJS. Joe continued to host the intermittent program until Resty Taruc returned to do the show in 1977.

In 1982, Radyo Pilipino was given its regular time slot, 7:00 – 8:00 p.m., from Monday to Friday. Joe became the regular announcer with Kaka Paquito Rey Pacheco doing the news.

“That schedule was good because it did not conflict with my full time work (at New Flyer),” noted Joe who added that, his young brood had grown at that time from one child (Mary Ann) to four with the birth of Luisa, Michael and Aaron.

“Alma’s hands were full so I would (give her a break) and bring the kids to the (radio) station. Their feet wouldn’t even reach the floor as they sat waiting for me to finish the show… those were the days…” reminisced Joe.

With Winnipeg’s Filipino population growing significantly in the late 1980s, CKJS launched the prime time morning show, Good Morning Philippines. Joe together with co-host Emmie Joaquin signed on for the first time on April 24, 1989. Joe had to leave his job at New Flyer Industries to take on the full time job co-hosting GMP. “Emmie (Joaquin), Kaka Paquito Rey Pacheco and I had become a team… she (Emmie) took care of creative programming, Kaka was the News Director… they would stay at the station after the show while I took charge of selling advertising for the morning show… it was not difficult (selling) because the community had grown to around 35,000 strong in 1989 and Filipinos had become strong consumers… the market was ready,” said Joe who added that he did not regret leaving his former job.

A month after being on air, the Winnipeg Free Press (WFP) featured the morning show on its Entertainment page. “Filipino radio makes waves. Local station gambles on ethnic content during morning rush,” headlined the article written by WFP reporter Dan Lett. Lett further wrote, “The program (GMP) is a gamble for CKJS, going head-to-head against the commercial radio programs during the prized 6 a.m. to 9 a.m. morning slot five days a week… but since going on air April 24 (1989), the program seems to have carved its own niche.” 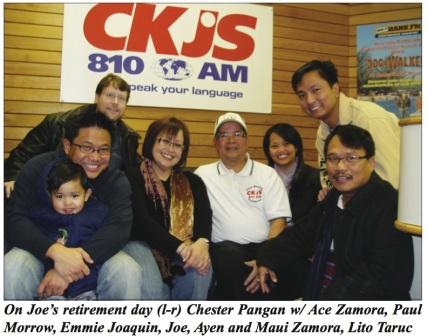 Joe, Emmie and Kaka became household names in the local Filipino community. They were involved not only in Filipino events (e.g. Fundraisers for Philippine disasters, the Philippine Centre – pre-PCCM when it was still on Juno St., Folklorama Philippine Pavilion and Tuklas Talino singing contests) but also in numerous mainstream projects like the United Way campaigns, McDonald’s McHappy Days, Canadian Blood Services, and Winnipeg media’s annual fishing derbies where Joe always wound up as top angler.

From 1989 to 2008 – many changes occurred on GMP but Joe was a constant element. In the late 1990s, Jimi Cruz joined Emmie and Joe when Kaka retired. Then, when Jimi moved on to another job, Lito Taruc took over as News Director. In December 2003, Joe’s co-host, Emmie Joaquin – now Editor-in-Chief of the Pilipino Express news magazine – changed careers, leaving Joe anchoring GMP solo for a few months. In the spring that followed, Donna Natividad-Arenas became GMP’s female voice. Lucille Nolasco stepped in as Joe’s on-air partner when Donna went on maternity leave in 2008.

“Through all these years, there was never a problem getting Joe to wake up early in the morning – flood or blizzard… Joe was always in front of the microphone as soon as the clock struck six in the morning… even when he was sick, Joe was there…” said CKJS Operations Manager Gido Gigliotti.

Randy Skulsky, Station Manager, said that Joe will be surely missed by his loyal GMP listeners but, “…Joe deserves to enjoy his retirement years with his family especially his growing grandchildren.” 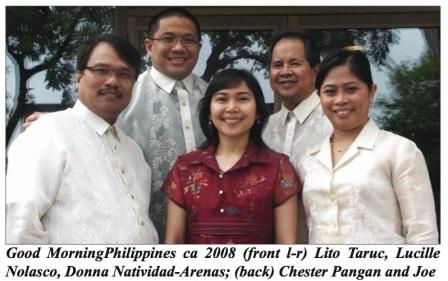 During Joe’s last show, friends who worked with Joe at CKJS visited to honour Joe. As co-host Lucille Nolasco operated the soundboard, Joe’s former co-broadcasters took turns on air to greet and congratulate him on his retirement. CKJS Pinoy Saturday Night’s Maui and A-yen Zamora came with their two children, Ace and Bea, in tow. A-yen tearfully thanked Joe for inviting her to join CKJS in the mid-90s when she was still a senior high student at Daniel McIntyre Collegiate. Chester Pangan came two hours before his usual time to say farewell. Donna Natividad-Arenas and Michele Majul called in to bid Joe goodbye and acknowledge his contributions to the community. Emmie Joaquin reminisced about the 15 years she was co-hosting GMP with Joe.

“I had to ask Lucille to get me do a program sign-off with them… since I was not able to do a proper sign off with Joe when I left GMP on New Year’s eve in 2003… and we did it the way used to do it when we began GMP in April 1989… it was (for me) some sort of a closure, too,” said Emmie.

Joe is currently vacationing in the Philippines with his wife, Alma. When they return to Winnipeg in January, Joe said he probably won’t miss waking up before dawn – GMP now signs on at 5:30 a.m. – but he will definitely miss his listeners… and his fellow early morning risers, Lucille, Donna and Lito.

“Time to move on and go fishing,” said Joe.

Have a comment about this article? Send us your feedback