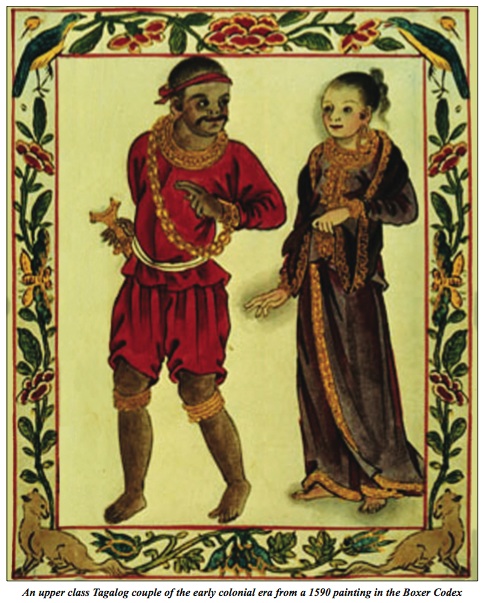 We don’t hear the word maharlika very much anymore. Its origin goes all the way back to the ancient language of India called Sanskrit, from the word, maharddhika, meaning, "a man of wealth, knowledge or ability." Today it is generally accepted to mean "nobility or aristocracy." The venerable Tagalog dictionary of Leo James English gives us this example: Ang mga harì at prinsipe ay kabilang sa mga maharlikâ. [Kings and princes belong to the nobility.]

That’s the modern definition, but back in the days when there really was a maharlika class in the Philippines, it was actually a lower class of nobility that served the datus, or chiefs, in times of war. The maharlikas belonged to the “kings and princes” and not the other way around.

We can thank former dictator Ferdinand Marcos, mainly, for our misunderstanding of this word today. “Maharlika culture” was his propaganda tool for promoting nationalism during the days of the “New Society.” The word became very fashionable and was used in naming streets, buildings, banquet halls, villages and cultural groups. Marcos named a highway, a broadcast company and the reception area of Malacañang Palace, Maharlika. He even toyed with the idea of renaming the whole country as Maharlika.

Marcos’ fascination with the term apparently began in World War II when he claimed to have commanded a guerrilla force of over 8000 men that he called the Maharlika unit. His claims were proved false in 1985.

It’s ironic that Marcos’ first use of the word maharlika was quite appropriate because he only used it to name a group of soldiers (albeit fictitious soldiers) rather than an entire aristocracy or country.

The maharlikas were just one rank in the ancient class system of the Tagalogs, which was a little more convoluted than our Western idea of aristocrats and commoners. This class system was the norm in other parts of the Philippines, too, though the names of the classes varied slightly.

Maginoo – During the pre-colonial era, the maginoo class was the top of Tagalog society. Men and women of this class were generally referred to with the respectful title of Ginoo. Individually, the terms, Gat, meaning Lord, or Dayang, meaning Lady, preceded names as in, Gat Buka (now a town in Bulakan) and Dayang Angkatan who was mentioned in the Laguna Copperplate Inscription.

A panginoon was an especially wealthy maginoo who owned much property and valuable land. A panginoon was addressed with the shortened honorific, poon, which could be translated into English as milord or milady. Aba poon meant, “Greetings, milord/milady” and Oo, poon meant, “Yes, sir/ma’am.” Poon survives to this day as the term of respect, po.

A datu, or chief, was a maginoo who had followers and who ruled beyond his immediate household, over whole communities. This term was used in the Visayas as well as Luzon. A datu with power over a large area held the title Lakan or Rajah, a Hindu word brought from Malaysia. When the Spaniards arrived in the Manila area in 1570, there was a Banaw Lakan Dula in Tondo and an Ache Rajah (Ladyang) Matanda in Manila.

Timawa – The timawa class were free commoners of Luzon and the Visayas who could own their own land and who did not have to pay a regular tribute to a maginoo, though they would, from time to time, be obliged to work on a datu’s land and help in community projects and events. They were free to change their allegiance to another datu if they married into another community or if they decided to move.

Maharlika – Members of the Tagalog warrior class known as maharlika had the same rights and responsibilities as the timawa, but in times of war they were bound to serve their datu in battle. They had to arm themselves at their own expense, but they did get to keep the loot they won – or stole, depending on which side of the transaction you want to look at. Although they were partly related to the nobility, the maharlikas were technically less free than the timawas because they could not leave a datu’s service without first hosting a large public feast and paying the datu between 6 and 18 pesos in gold – a large sum in those days.

Alipin – Today, the word alipin (or oripun in the Visayas) means slave and that’s how the Spaniards translated it, too, but the alipins were not really slaves in the Western sense of the word. They were not bought and sold in markets with chains around their necks. A better description would be to call them debtors. They could be born alipins, inheriting their parents’ debt, and their obligations could be transferred from one master to another. However, it was also possible for them to buy their own freedom. A person in extreme poverty might even want to become an alipin voluntarily – preferably to relatives who saw this as a form of assistance rather than punishment.

There were two kinds of alipins:

Aliping namamahay – or a house-holding alipin, could hardly be called a slave at all. He was more like what we call a serf in English. A namamahay was usually an alipin who had received a piece of land from his maginoo master. In return, he was required to hand over a portion of what the land produced as a tribute and to occasionally work on his master’s land.

Alipin sa gigilid – The people near the bottom of society were known by the scornful term, alipin sa gigilid. In pre-colonial times the gilid was the area behind and below the house where the toilet was located. These alipins were single men and women who worked in their master’s homes, tending the gilid, among other chores. They were completely dependent for food and shelter, but if they could make some money on the side, they were allowed to keep some of it, and if they managed to save enough, they could buy their way up to namamahay or even timawa status. If a man wanted to get married, his master would usually set him up as an aliping namamahay with his own home and a patch of land, though this was rarely done for women.

The people who bore the greatest stigma in society were the alipins who were indebted to other alipins. A sa gigilid of an aliping namamahay was called a bulisik, which meant vile and contemptible. Even lower was the bulislis who was a sa gigilid indebted to another sa gigilid. The vulgar name meant that these alipins were so vulnerable that it was like their genitals were exposed. In modern terms we might say they “had their pants down,” though bulislis really means, “lifted skirt.”

The only people lower than the bulislis were slaves who were brought from other communities or who were captured in war. They were considered non-persons until they were accepted into the community. Once accepted, they had the same rights as other alipins.

Have a comment on this article? Send us your feedback.
Visit Sarisari etc. for more about Filipino history and language.
Find Paul Morrow on Facebook.