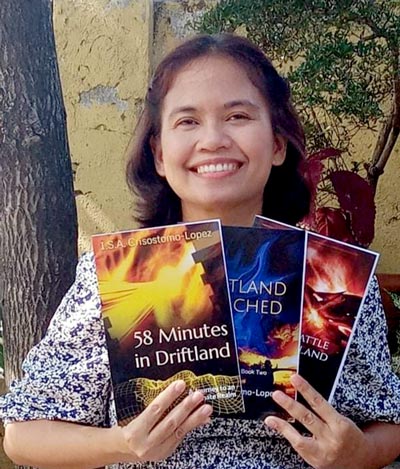 When a retirement offer landed on her lap, I.S.A. Crisostomo-Lopez had mixed feelings. It means saying goodbye to her desk job as a corporate communications officer and embracing a more demanding job at home as full-time mother to her three daughters.

Years later, she had no idea that at 44, she would give birth to a son. With arthritic fingers and a bad back, she mused that becoming a mother for the fourth time was indeed a challenge. But it did not deter her from doing what she loves most – writing. In 2021, she finally completed her first science fiction trilogy on Amazon, The Driftland series.

The Driftland series is a coming-of-age story about Alunsinag Bayani, a young Filipino immigrant in America who is faced with teenage issues like bullying, low self-esteem, alienation, and falling in love.

The first book in the series, 58 Minutes in Driftland, is about how the boy Alunsinag who accidentally stepped into an alternate realm (Driftland) and discovered he could switch places with his alternate more efficient self for 58 minutes. The switch helped him discover his strengths and gain his confidence.

Driftland Breached, the second book, is about the encroaching darkness caused by nightmares. Alunsinag must hurdle the challenges at hand and race against time to identify the Warriors of Light who were prophesied to save Driftland.

The last offering in the series, Final Battle for Driftland, is about the tests that the warriors must undergo to assess their strengths and vulnerabilities. They must overcome the four horsemen of darkness. In the end, Alunsinag must face the final test of faith to save both worlds.

The Driftland series by I.S.A. Crisostomo-Lopez is an allegory of a person’s journey to self-realization and the battle between good and evil. Filled with flawed but lovable characters, funny and adventurous incidents, and insights filled with wisdom, the story provides inspiration to young adult readers to never give up on their childhood dreams.

I.S.A. Crisostomo Lopez is a children’s book author based in Biñan City, Philippines. She is married with four children. On an interesting note, she writes in between house chores, loves online shopping and every now and then tries new cup cake recipes from the Internet.

Her earlier short stories were published by Adarna House (Si Lola Apura at si Lolo Un Momento) and Philam Foundation (Ang Bisikleta ni Kyla) and anthologized in a story collection, Hoard of Thunder 2 by UP Press (Passage). I.S.A. Crisostomo-Lopez holds BA in Communication Arts from the University of the Philippines Los Baños, and a Master’s in Fine Arts degree in Creative Writing from De La Salle University Manila.