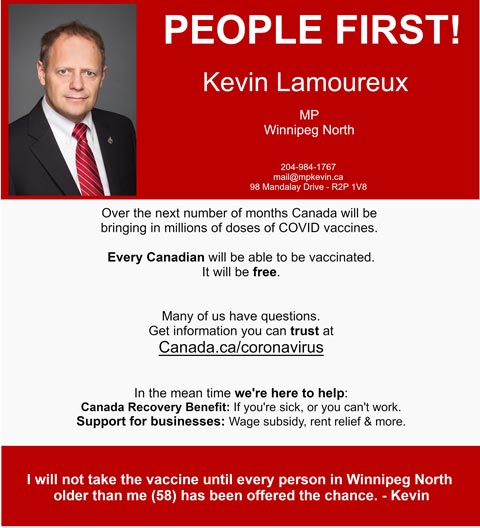 A few years ago I was at an event in Ottawa when the honourable Petronila Garcia, who was the Philippine Ambassador to Canada at the time, gave a speech at the embassy. She talked about the growth of the Filipino community here in Canada and made reference to the fact that in the not too distant future, the Filipino community in Canada will exceed one million people in Canada.

Back in late 2019, I was provided some immigration numbers and based on those numbers I started to talk about 2020 as the year in which Canada’s Filipino heritage community would pass one million people.

At the time, I did not know the immigration numbers for 2019 nor, obviously, for 2020, but based on previous years of immigration numbers and the birth rate, I felt comfortable in speculating that the Filipino heritage community would surpass one million people in 2020.

Well that did not happen primarily because of two things. As it turned out, immigration numbers from the Philippines decreased substantially in 2019 and the coronavirus prevented thousands of people from being able to come to Canada in 2020.

So that begs the question: When will Canada’s Filipino heritage community pass one million people? If you were to include people from the Philippines who are here as workers and students, it should be safe to say we are over one million now. After all, many of them will become permanent residents in the future.

So if we average out 25,000 immigrants for 2020 and 2021, keeping in mind if we include international workers and students, it should be safe to say that 2021 will be the year that we will have well over one million people of Filipino heritage living in Canada.

Over the last 50 years, the growth and impact that the Philippines has had on Canadian society has been significant in every way. Canada’s diversity is our greatest strength, as multiculturalism has made Canada a desirable country to come to for people all around the world. Our heritage continues to evolve every day, and in many ways, and the pioneers who came to Canada over the past six or so decades from the Philippines have blessed our society.

With over one million people of Canadian-Filipino heritage now living in Canada, you will find a healthy and growing Filipino community in all of our big cities. As the chair of the Canada Philippine Parliamentary Friendship Group, I often get to talk about the Philippines and the important relationship between these two great nations. And whenever I can, I like to say with pride that Winnipeg North is the very heart of Canada’s Filipino heritage community.

Kevin Lamoureux is Member of Parliament for Winnipeg North.