A hero from the past; a role model for our future 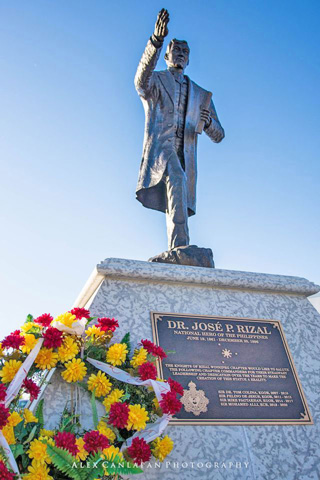 Anyone driving north on Keewatin Street will notice two things once you hit Jefferson Avenue: First is Keewatin Street turns into Dr. Jose Rizal Way and; second, there is a larger than life size statue of Dr. Jose Rizal. On August 24 I had the opportunity to attend the unveiling of a new monument and someone later asked me, “Who is Dr. Jose Rizal?”

A quick Google search will give a lot of detail as to who he was. Rizal is recognized as the founding father of the Philippine Independence movement. While the vast majority of people of Filipino heritage living in Canada are familiar with Dr. Rizal, he’s not so well known internationally compared to say Mahatma Gandhi.

Dr. Jose Rizal was born in 1861 and led a remarkable life. A brilliant and highly educated person, he spoke 22 languages, worked as a scientist, ophthalmologist, writer and artist. He wrote several novels like Noli Me Tángere (Touch Me Not) that pointed out the terrible unfairness in his society, and fuelled the struggle for Philippine independence.

In the late 1800s the Philippines were a colony of Spain, and Filipinos were oppressed and marginalized in countless ways by their colonial government. Rizal wanted better for his people, but he recognized that violence breeds violence, and that hatred can never build a positive society.

In 1896 tensions boiled over and an armed struggle known as the Philippine Revolution began. While his writings inspired many of the revolutionaries, he refused to join a violent struggle and pushed for fair representation in government and political change. Despite this, the Spanish government branded him a revolutionary and executed him for his writing. They couldn’t destroy his ideas though, and he helped create a unified, progressive identity for Filipino people.

With nearly one million people of Filipino heritage living in Canada and the fact that the heart of the Filipino community here in Canada is found in North Winnipeg, it’s only appropriate that we honour his memory here. It’s also important to remember that we aren’t just importing another country’s hero: Rizal’s legacy stretches far beyond his homeland. Few people here realize that he was actually a pioneering thinker in the fields of human rights and non-violent social change.

He was a contemporary of Mahatma Gandhi, the world-renowned Indian independence leader. (Almost 20 years ago as an MLA I was at the Forks where a statue of Gandhi was unveiled). Rizal’s writings sought to inspire exactly the same kind of non-violent independence movement in the Philippines. He taught the importance of education, science, and fair political representation to build a better society for everyone.

In these turbulent times, we need these positive role models more than ever. As we have difficult conversations about the impact of racism and colonialism on our society, we can look to the past for inspiration and answers. As many of our neighbours turn to the dark politics of fear, hatred and division, we can take inspiration from people like Rizal who remind us that the best way forward is through compassion, education, and cooperation with our communities.

Kevin Lamoureux is the Member of Parliament for Winnipeg North