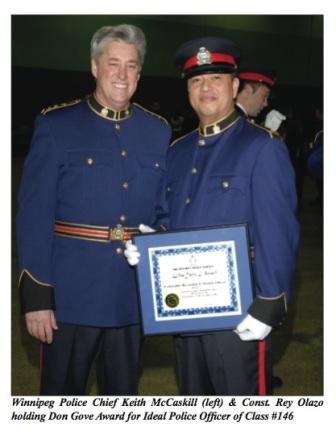 On November 20, 2008, 38 graduates of the Winnipeg Police Academy’s class number 146 stood proud, wearing their crisp blue uniforms after completing a nine-month course that began in February with 41 students. Among the new law enforcers were four women, one Chinese, one East Indian and one Filipino.

It was a special day not only for the families of the new recruits, but also for the Filipino-Canadian community in Winnipeg. The significance lies not so much in the fact that the new graduate increases the number of police officers of Filipino descent to 15 now active in the Winnipeg Police Service (WPS) but because the new constable is not even a Canadian citizen yet, having immigrated to Canada only in March 2007. And, unlike most of his classmates, he is not in his 20s or even 30s.

At the age of 45, Constable Reynaldo Olazo holds the record of being the oldest recruit in the history of Winnipeg Police Service (WPS). His younger classmates fondly refer to him as “Papa Rey”.

“One fellow recruit from Ste. Anne is 20 years old and when he learned that my oldest child is also 20, he began referring to me as ‘Papa Rey’ and the others followed suit,” recalls Olazo during a relaxed conversation with the writers at the office of Pilipino Express.

But Olazo might not be holding that distinction for very long. “I heard they have a 49-year old recruit in the current class of the Winnipeg Police Academy,” said the affable police officer whose classmates and instructors deemed worthy of the much-coveted Sgt. Don Gove Award for having been named the “Ideal Police Officer [of] Recruit Class No. 146.”

Olazo may be a rookie in Winnipeg but he comes with the credentials of a veteran of 23 years spent in the field of law enforcement in the Philippines. He spent eight years as one of “Manila’s Finest” in the Western Police District and then moved on to join the National Bureau of Investigation (NBI) for another 15 years where he held the hazardous position as a Chief in the NBI’s Security Management Division and Witness Protection Program.

As an NBI executive, he had to train with the American Federal Bureau of Investigation (FBI) and the U.S. State Department in anti-terrorism. He also took training in Bangkok at the International Law Enforcement Academy, just to name a few.

So, how does he feel being called a WPS “rookie” police officer?

“I welcome it because for me, the law enforcement profession is not based [only] on your educational attainment but it is more on street experience. For me a seasoned police officer is one who has been on the streets for quite some time. For me being a new immigrant here, I don’t know the streets. That’s why I still welcome it, being a rookie.”

How did he find the training?

“Well, that was my first hurdle, the police agility test. It’s really something else here; it’s tough. It took me two tries before I passed,” he laughs. “But I guess, as they say, it must really run in your blood.”

Why did he decide to immigrate?

Prior to immigration, Olazo’s wife worked as a senior manager at the SM Group of Companies. Together, the couple lived a comfortable life, earning a good living for themselves and their two children in Quezon City.

“But, I could see that I was drifting away from my family because I was too busy,” admits Olazo. “I left for work when it was still dark and would come home from work when it was already dark again… I only saw my family when we went to church on Sunday. My daughter was growing up and I hadn’t even enjoyed seeing my son grow up. Then one day, I was surprised to see that he was already grown up.

“You know, you get to a high point in your career and you think, ‘It’s time for me to be a parent for my family while I’m still young.’ That’s when my friend said, ‘You might want to immigrate to Canada.’ I said, ‘where?’ – ‘Winnipeg’ – Where’s that?”

Olazo and his wife bought the idea and proceeded to apply under the Manitoba Provincial Nominee Program.

“When I left the Philippines, I made a pact with my wife that I would not join a police force again,” he said.

On life in Winnipeg for him and his family

Olazo emigrated with his young family from the Philippines in March 2007. Like any new immigrant father with his family in tow, he wanted to get a job right away; and he did – as security guard at the Winnipeg’s Richardson International Airport.

“That was in April… then by May of 2007, I landed a job with the Commissionaires and I was assigned to the Photo Enforcement Unit… by February of 2008, I had my oath-taking as a WPS recruit and the training began… and then, on November 20th, I have become a member of the WPS,” he recalls.

So, what happened to the pact between him and his wife? Olazo said he is grateful to his wife for understanding his career choice and he pointed out that there is a huge difference between his former job in the Philippines and his current work in Winnipeg.

“I thought I had gotten the best from the career I left behind but I saw that the police are so well respected here. They’re professionals and they have an integrity base that is beyond question.”

Olazo also appreciates the balance between work and family that the WPS encourages.

“They tell us time and time again, ‘You have to have time for your family.’ In fact, our duty shifts are five days straight and then you have four days off. You have more time for you family. I’m very happy. I can’t ask for more.”

He is also happy that he found several fraternity brothers in this city. Olazo is a member of the Tau Gamma Phi – a fraternity he joined when he was still an engineering student at the University of the East. 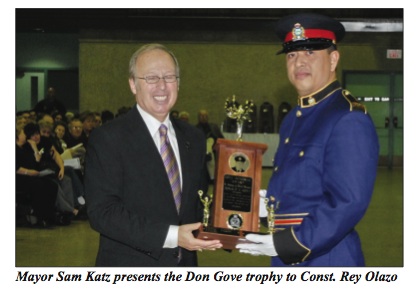 On being a Police Officer in Winnipeg

The fair and tall (almost 6 ft) Olazo declares, “There’s a big difference between fear and respect. Here the police are being respected but back home, police are being feared. So when I saw that, I said, ‘Why not give it a try?’”

“When a Filipino family sees that a responding officer is a fellow Filipino, the situation naturally de-escalates and cooler heads prevail.”

“I’ve been called to some incidents involving Filipinos and I say to them, especially the teenagers, I wish you could see what life is like for the young people in the Philippines. You’re lucky that you’re here and your life is good.”

What or who does he miss now that he is away from the Philippines?

“My mom. My mother lived with us back home… WPS sent her an invitation to attend my graduation but unfortunately, for some unknown reason, the Canadian Embassy in Makati did not give her the necessary visa… she’s very proud of me and my achievements… her presence would have made my day more than perfect.”

On starting all over again

“My guiding principle in life,” says Olazo, “is you can’t reach the top of Mount Everest in just one step. I came here for my family’s sake, so if I have to sacrifice and start again, for me, it’s OK. Anyway, the way I see it, I’m not old yet.”