Engineered with love – part 1 of 3 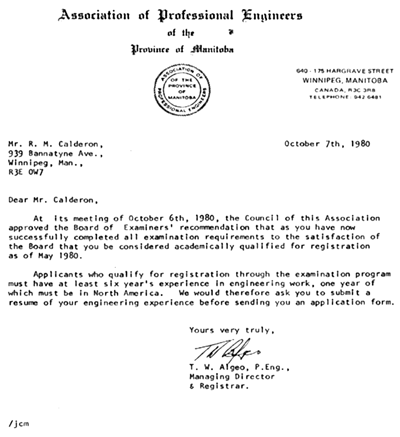 What motivates you? A seemingly simple question, which surprisingly yields interesting, sometimes complicated answers. Whenever I hear the word “motivation,” my mind goes back to a seminar I attended a few months back. The facilitator asked us, “what motivates us to come to work?” Typical positive answers expectedly sprung up – from money to career goal, from camaraderie to challenges, from family to future – but nothing prepared me for one colleague’s response; “getting away from my wife.”

Everyone roared in laughter as obviously, it was in jest or most of us at least thought so.

Anyhow, in jest or not, if this colleague of mine was motivated to come to work by getting away from his wife, a young engineer during the mid-70s had a contrasting motivation to come to live in Canada. And that was to get closer to the love of his life – a nurse he met during his teaching days in Baguio City.

Abandoning a promising engineering career in the USA, and facing risks and uncertainties might be one of the toughest decisions one has to make, but for this young engineer, his motivation came with a goal of building a future with that nurse here in Canada.

The foundation – his early childhood and humble beginnings

Born in the forties in a barrio called Payocpoc Sur in Bauang, La Union, Roger grew up in a place and time where electricity, water lines for drinking water or telephone services were non-existent. Roger still remembers his hometown and childhood with so much clarity that hearing him describe it felt almost like I was transported back in time – playing outdoors with kites, rotating wood tops and other native Filipino games, going to a valley of rice fields to collect ipil-ipil trees and gathering various local fruits such as lomboy and damortis, among others.

With inspiration from a sixth grade teacher who instilled the benefits of studying hard and with enthusiasm and encouragement from his aunt, he pursued, and eventually, attained a degree in Electrical Engineering at the Mapua Institute of Technology. Back in 1971, the year he graduated, he was faced with a problem most recent university graduates share – finding a job! Fortunately, as one of the top ten graduates in electrical engineering, the university recommended him for a work placement in a microcircuits electronics firm. He was eventually hired as a quality control engineer. And that is how he got his first job out of university.

The structure – constructing his career in engineering

In the early summer of 1972, he went on to teach engineering, math and drawing courses at the St. Louis University in Baguio City for the next four years, while also taking some graduate courses. In 1976, one older faculty colleague asked him if he should continue teaching or do something different, or practice field engineering while young. That question may have been the cue for him to change course and return to Makati to work for the huge engineering consultant firm, Trans-Asia (Phils) Inc., which had more than 1,000 engineering employees at the time.

Trans-Asia turned out to be the perfect place to learn and master engineering planning and design practice. It offered him the keys to learning the foundations of detailed electrical engineering systems design that helped him throughout his early engineering career.

Two years later, he was offered work at a large electrical contractor in Guam, USA. He accepted and was hired as an electrical estimator and project coordinator. His employer had arranged a multi-year work entry visa and even offered to sponsor him to immigrate in the USA!

Change order – the decision that would change his life

For most, this is the ultimate realization of that great American dream. But unlike most, Roger would eventually and quickly give this up to be with his ladylove in Winnipeg, who had just landed a year before him. It was indeed a very risky and gutsy decision. But, as this decision was engineered with love, it was destined to last a lifetime – or would it?

Find out in the next issue of Pinoy Inhinyero, as we follow Roger in his quest to become a professional engineer in Manitoba.

Ethel Clemente Fernandez is registered as an Engineer-in-Training (EIT) with the Association of Professional Engineers and Geoscientists of the Province of Manitoba (APEGM). She currently works for a federal crown corporation and is serving on the Executive Committee of the Filipino Members Chapter (FMC) - APEGM. For inquiries, please email fmc_apegm@yahoo.ca