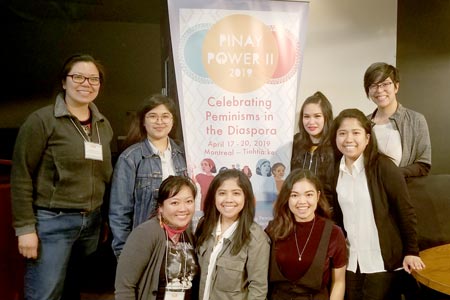 In mid-April members of ANAK travelled to Montreal to participate and present at the first ever Pinay Power II: Celebrating Peminisms in the Diaspora conference held at McGill University. The feminist Filipina conference itself is inspired by the Pinay Power anthology by Dr. Melinda L. de Jesús, which was originally published in 2005. Although this book was published almost fifteen years ago, it would become the first step in a perfect series of events that would become the hugely successful Pinay Power II conference, a precursor to an upcoming second anthology. Together with Monica Batac, PhD Candidate; France Clare Stohner, MA; and a passionate team of hardworking Filipina/Filipinx McGill students: Amita Biona, Monica Manuel, Chloe Rodriguez, Julia Baladad, Psalm Tesalona, and Alexandra de Guzman; the team organized an unprecedented gathering of academics, artists, activists, concerned community members, allies and more under the ivory tower. The conference brought together Peminist Filipinas, Filipinx, and non-binary folx from all over North America, the Philippines, and more to discuss the barriers we face as a community in academia.

The ANAK team presented on the importance of having an organization that helps bridge the gaps for Philippine youth who are trying to adjust to living their lives in a new country, and for second and third generation youth who are trying to reclaim their Philippine identity. We were able to discuss with attendees the importance of responding to the needs of the community and that it is crucial to be able to meet all members of our community wherever they are in their process of self-identity.

The official opening ceremony began with a blessing from Indigenous leader Wanda Gabriel of Kanehsatake (Oka) Kanieke’ha:ka nation and Assistant Professor at the McGill School of Social work. A ceremony offered by Jen Maramba of Kapuwa Collective, and Jana L. Umipig from the Centre for Babaylan Studies followed. As colonized people who have migrated and are now living as settlers on colonized land, it is important for the Filipino community to acknowledge the origin of the land that we now have the privilege of living on. Decolonization was a strong theme throughout the conference, as it is the root that sprouted the barriers that so many of us face, and the ignorance to current colonial mentality is what is keeping those same barriers in place.

I myself am not an academic and I was worried that I would not be able to relate or participate in a meaningful way at this conference, but I was completely wrong. I never could have imagined how this conference would change me. More than 180 community members; new Canadians, and Americans, first, second, and third generation came together, shared their stories and challenges within academia, other faculties and industries, and in their personal lives. From day one of the pre-conference, the vulnerability of brave individuals speaking out about their experiences moved me and made me feel safe. The stories were so similar to my own and the comrades that I went there with. Whether we were born in the Philippines, or outside of the Philippines, there were always parallels. We had all struggled with acceptance and self-love while navigating our space in the diaspora. The importance of seeing people from our culture being represented in our desired fields has a direct influence on how we feel about ourselves and whether or not we feel like we can succeed in our endeavours.

The conundrum that is being part of the diaspora is not something we often have space to discuss. I say this, not for lack of gratitude, but because after attending Pinay Power II, I am now acutely aware of the need for these kind of safe spaces. Places where we can share the truths and triumphs of people who are just like us. To create space where Pilipinas/Pilipinx voices are part of the conversation, and part of what will shape the future within ivory tower institutions like McGill, because our contributions matter in the fight for equality.

Immigrants are expected to be so grateful for the opportunity to migrate, that the trauma they carry can often be dismissed once they are in “The Land of Opportunity.” The symptoms of these unresolved traumas defy a more holistic understanding of the culture that is left behind. And so, we make inside-jokes about Filipino traits we can’t reconcile, abusive behaviours begin to pass as culture, and sometimes we hold it all in our hearts and don’t express it at all.

The truth is, arriving in a more developed country comes with a whole set of different challenges. Migrants face racism, language barriers, and the heartache of leaving their families behind, but in order to survive, people have to work – many work multiple jobs in order to make ends meet, sacrificing precious time with their families. Eventually, we trade in the savoury tone of our native language for the straightforward efficiency of English, and rarely have the opportunity to go back to teach it to youth. Recalling the memories about living off the land in the province or what it was like to live in the competitive environment that is Metro Manila get pushed aside to make room for a new lifestyle. The oral histories about how relatives survived the Japanese occupation during World War II become harder to recall, and we run the risk of never being able to tell these true tales of resistance and survival at all.

The Pinay Power II conference was not just a meeting of the minds to discuss how the system does not favour us. It was a summit that brought Peminists, Pilipinas, Pilipinx, non-binary folx, and allies all under one roof to remind us of our power. To remind us that we come from a resilient pedigree of people that has survived regardless of all the efforts to dilute or destroy our culture. To remind us that our space in the diaspora has given us a unique opportunity to weave our collective experiences into the story that begins on the other side of the world. The diaspora is the space in between and comes with many layers. We must create spaces to acknowledge our own intergenerational traumas, while understanding that we are not the most marginalized, and must also acknowledge our privilege and take responsibility for how we ourselves contribute to systems of oppression.

I can confidently say that the Pinay Power II conference has ignited a fire in my soul and the souls of all the other participants. I am eternally grateful for the opportunity to have been able to attend. We can all look to the future with an angle of empowerment knowing there are Filipinas, Filipinx, and non-binary folx who are claiming space within academia, who are using their voices and artistic expression to enlighten and inspire, and who are alongside us truly making change.

“So let it be known, if you don’t already
Pinays have always been part, and parcel, if not, imperative and critical to the struggle
Filipinas are no strangers to wielding our own power
Of all the privileges that exist in this world, none of which you may be a benefactor of
There is at least one you bear
And that is the privilege of having been born a Filipina
Your DNA contains building blocks made from the mud of over 500 years of resistance and survival
And when you are ready, sis, we’ll be right here”
Spoken word by Faith Santilla
– From ‘Us’ by rapper, Ruby Ibarra

Vizlumin Cabrera is the Public Relations officer for ANAK. To learn more about how to get involved in ANAK programs and events, visit www.anak.ca or email info@anak.ca.