Editor’s note: The Philippines has a new chief executive with a familiar old name. Ferdinand Marcos Jr. took his oath of office as the 17th president of the Philippines on June 30, 2022. Jon Malek looks into the Marcos legacy and its impact on the nation’s political dynasties in this first part of his two-part series.

The results of the 2022 Philippine elections surprised many observers. Ferdinand “Bongbong” Marcos had a strong chance of winning, according to several polls, but nobody predicted the size of the margin he gained over his main rival, Leni Robredo. The election of Bongbong, also known as BBM, and Sarah Duterte continue the Philippine’s legacy of political dynasties. In my first of a two-part series on the Marcos political legacy, I discuss international reaction to the election and how the EDSA People Power Revolution provides a useful context. 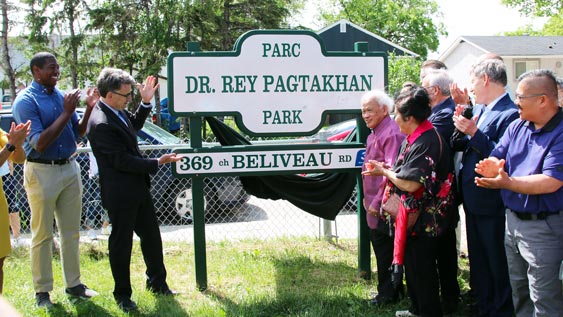 Distinguished Filipino Canadian Dr. Rey Pagtakhan was honoured at a park dedication on June 25, for his many achievements and contributions benefitting various communities in Winnipeg and beyond.

The momentous event, which was delayed seven times due to the COVID-19 pandemic, was held at St. Vital Park on 369 Beliveau Road.