From the delicious Pinoy food served at the concession stands, to Filipino music and performances by Musica singers, creative video productions by Fil-Canadian students from Sisler High School shown inside the arena, to the many kababayans among the sold-old crowd who cheered for the home team, it was no doubt a night to celebrate Filipino culture and unity.

A special Jets logo took the spotlight incorporating Filipino values like unity and togetherness and identity, represented by the eight rays of the sun for the eight provinces that triggered the Philippine Revolution during the Spanish occupation. The special Filipino Jets logo was a collaborative design of graphic artist Jonato Dalayoan of 4two Design Inc., and Marc Gomez, True North Sports + Entertainment’s Creative Lead for Hockey Branding.

Kababayans showed their support by sporting hoodies and shirts with the special logo during the game.

Representing the Filipino community at the ceremonial puck drop were Aida Champagne, Ron Cailo, Manny Aranez and Rod Cantiveros. Joining them were Josh Morrissey (#44) of the Winnipeg Jets and Fil-American Jason Robertson (#21) of the Dallas Stars.

And the home team did not disappoint. The Jets continued their winning streak by prevailing over the Stars, 5-1. 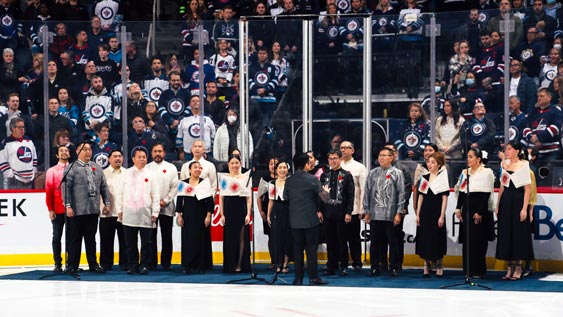