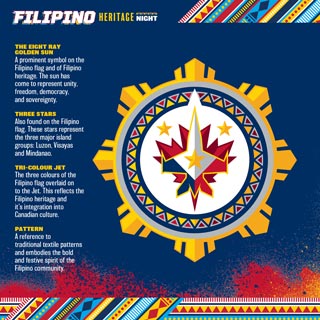 The Winnipeg Jets will host their first Filipino Heritage Night on Tuesday, November 8, during a game against the Dallas Stars at 7:00 p.m.

The game will begin with a puck drop ceremony with members of the Filipino community including: Manny Aranez, Commissioner of the Philippine Basketball Association and recent inductee into the Basketball Manitoba Hall of Fame; Aida Champagne, of the Manitoba Filipino Street Festival; Rod Cantiveros, publisher of the Filipino Journal; and Ron Cailo, alumnus of the Winnipeg Jets Hockey Academy, which introduced him to the sport in Grade 3, shortly after he arrived in Canada, and led to a passion for hockey which now sees him playing as a goalie with the St. Paul’s Crusaders.

Joining the team’s regular gameday hosts, Brody, Drew, and Karly, will be Chester Pangan, co-host of Good Morning Philippines on CKJS 92.7 FM who will also mix Tagalog into the in-game presentation as part of his role as guest host.

Performing the game’s national anthems, and entertaining the crowd with cultural intermission performances, will be Filipino Choir Musica, led by Artistic Director Dante Aviso. Filipino DJs will bring the party atmosphere before the game, spinning tunes in the Canada Life Centre atrium and concourse.

Fans will be treated to featured concession showcasing Filipino cuisine including a Grilled Chicken Adobo Bowl, Traditional Pork Lumpia, and a Chicken Adobo Skewer, which is also a permanent feature at all Aviator Grill locations this season.

Students from Sisler’s CREATE program have collaborated with the Winnipeg Jets game presentation team on key visual presentation elements with graphics and imagery that will be showcased throughout the game.

One of the hallmarks of the logo design is the representation of the eight-ray golden sun and three stars of the Philippine flag combined with the Jets roundel. The three colours of the Filipino flag are overlayed on the jet reflecting the integration of Filipino heritage into Canadian culture. Inclusion of a traditional textile pattern further embodies the bold and festive spirit of the Filipino community.

The logo will be featured on the team’s warmup jerseys which will be auctioned off following the game in support of Filipino youth initiatives in the community, including the CREATE program at Sisler High School. The auction opens November 17 and runs until November 27 at auctions.nhl.com/WinnipegJets.

T-shirts and hoodies with the Filipino Jets logo will be available at Jets Gear and TrueNorthShop.com beginning November 8 with a portion of proceeds also going toward local Filipino youth initiatives. The line will further expand with crested hoodies and logo pucks being available in later November.