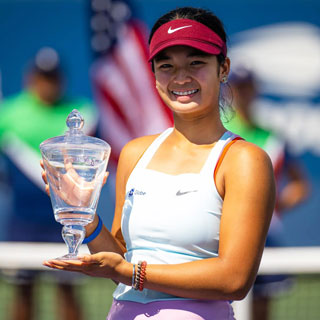 On September 10, Alex Eala made history in the US Open as she became the first Filipino to win the US Open junior girls’ singles crown. The 17-year old Eala defeated Czech Republic’s Lucie Havlickova in the finals of the tournament, 6-2, 6-4. The 2022 US Open girls’ singles competition was held in Flushing Meadows, New York.

In New York, she delivered her victory speech on Court No. 11 in Filipino.

“Buong puso ko itong ipinaglaban hindi lang para sa sarili ko kundi para makatulong din ako sa kinabukasan ng Philippine tennis. So hindi lang ‘to panalo ko. Panalo natin lahat (I poured it all out not just for myself but also because I want to help improve the future of Philippines tennis. This is not just my victory. This is our victory),” she said while trying to hold back tears.

At the post-match interview, she described her victory as overwhelming.

“I think this is a huge step for me personally, as well. I’m super happy to represent my country and do something with a big platform, being able to inspire other younger people,” she said.

Eala reached a career-high juniors ranking of No. 2 in October 2020 following a semi-final appearance at the French Open girls’ singles in Paris.

Eala has been a scholar of the Rafa Nadal Academy in Spain under coach Adrien Alexis Vaseux for the past four years.

The previous best finish in the competition by a Filipino athlete was in the semifinals, by Felix Barrientos at the 1985 Wimbledon. This feat was then matched by Eala at the 2020 Roland Garros and this year’s US Open.