In Bolinao, Pangasinan, there is a small monument that marks the site of the first Christmas mass ever held in the Philippines. Two hundred years before Magellan wandered into the Philippine Archipelago, a Franciscan friar named Odoric of Pordenone, Italy is said to have landed on the shores of Pangasinan, seeking shelter from a stormy sea.

Stepping onto the beach and carrying a black crucifix he met “hostile natives” who, upon witnessing his courage and faith, were soon pacified. After showing the locals some pictures of the infant Jesus, Joseph and Mary, the friar and his companions erected a cross and planted a Christmas tree. There they kneeled and celebrated the first Christmas mass in the Philippines and later baptized several Pangasinans. The date was December 25, 1324.

Or maybe that date was in the year 1200 – or maybe it was on some Christmas day between 1280 and 1320. Take your pick; the facts are “open to interpretation,” as some history buffs might say. Real historians, however, must play the part of Scrooge in this Christmas tale and say, "Bah! Humbug!" – because it never really happened.

Friar Odoric was a real person but it is not likely that he ever visited the Philippines – much less performed baptisms and a mass in Pangasinan. And the Christmas tree? Well, the Italian friar was probably not carrying a pine tree with him on his sea voyage. Also, tree decorating was considered a pagan custom at that time, not coming into fashion for Christians until the 1500s in Germany and not until the mid to late 1800s in the rest of Europe. Even today, decorating trees is not a major part of Christmas celebrations in Odoric’s homeland of Italy where nativity scenes are more popular. 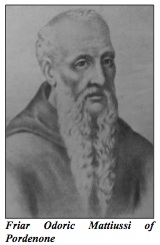 Church biographers report that Odoric Mattiussi of Pordenone was born sometime around the year 1286 and he entered the Franciscan Order at Udine in about the year 1300. (Some historians, such as William H. Scott, doubt that he was a priest.) In 1318, Odoric set out on a mission to Asia. He travelled from Italy to Turkey, Iran, India, Sri Lanka, Sumatra, Java, Borneo, Vietnam and China, where he stayed for three years. He then returned to Italy by an overland route through Mongolia and Tibet.

When Odoric arrived home in 1330, he dictated the story of his 12-year adventure to a friar named William of Solagna in Padua but he didn’t say anything about a Christmas mass with a Christmas tree anywhere in his travels.

So where does Pangasinan fit into this story? Believers of the myth point to a place that Odoric called Thalamasin. Its supposed connection to Pangasinan is probably based on an overly hopeful interpretation of an 1866 book by Henry Yule, Cathay and the way thither. In an examination of Odoric’s account, Yule speculated on the possible meanings of the name Thalamasin and he noted that tanah masin means “land of salt” in Malaysian. This has been enough evidence for some history buffs to declare that Odoric visited the Philippines because the name Pangasinan means, “the place where salt is made.” Some also see a connection to a mythical land with a similar name, Tawalisi, which was the home of the Pangasinan warrior princess, Urduja – but that is an entirely different myth. 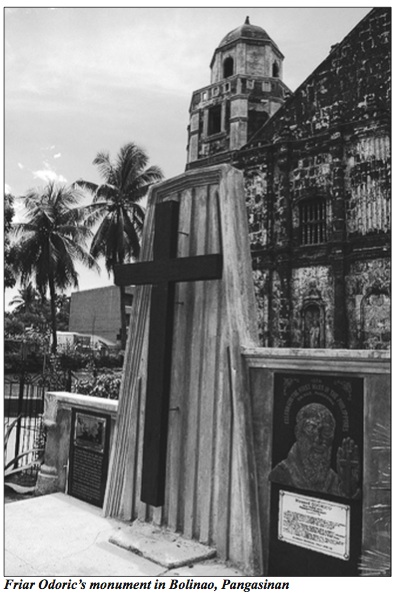 Odoric did not say anything about salt in his account of Thalamasin, which he said was also known by the name, Panten. He did say that this land had various trees that could produce flour, wine and poisons, and that the men of this place used blowpipe weapons and protective amulets inserted under their skin. However, as Yule pointed out, these characteristics could describe many places in the Malay Archipelago.

Odoric’s narrative places Thalamasin somewhere between Java and Champa (now a part of Vietnam), and he said it was near the “South Sea.” However, Bolinao, Pangasinan is 16 degrees north of the equator and it is a huge detour from a direct route between these two places.

So, it turns out that this story of the first Christmas in the Philippines is pure humbug. But why would anyone bother to invent such a story? Unfortunately, there is no written history of the pre-colonial Philippines; almost no written documents at all, in fact. Foreign accounts are sketchy and they almost never mention places in the Philippines with recognizable names. This has been frustrating for historians and for Filipino nationalists, and it has led some of them to cross the line between history and myth. Wherever there is a lack of knowledge, there will always be some people who want to fill in the gaps with information that makes them feel important, no matter how desperately far-fetched that information is. Meanwhile, scientists and historians who do legitimate research that happens to debunk these myths are often painted as villains. In the case of Odoric’s mass in Pangasinan, they are like the Grinch who stole Christmas.