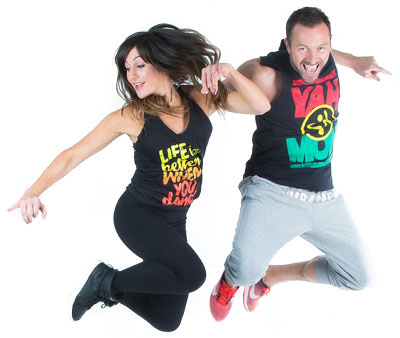 Not one, but two of Zumba world’s superstars are coming to Winnipeg on October!

I am beyond thrilled to be a part of a hard-working group of friends, all Zumba instructors, in bringing Zumba education specialists and international presenters, Kass Martin and Steve Boedt, to our beautiful city.

I first met Kass in person when she visited in October of last year and did a master class. She was such a genuine and inspiring person. She never seemed to get tired – such a ball of energy on stage. It’s unbelievable, even in her own words, how a simple mother of two, who almost did not dare to dream, could be in such a position to teach and positively influence others, while doing what she loves.

Kass became known as the face of Zumba and spreads the love of Zumba fitness all over the world as an instructor, presenter, TV star and teacher.

In between regular classes, Kass travels to different parts of the world, often with her best friend, Steve Boedt. The two also hosts their very own podcast, The Fun Road, where they coach, educate and inspire people towards confidence and success.

I remember asking Kass how to correctly pronounce Steve’s last name. And she told me it’s pronounced as “boot,” like the footwear. So there.

Known for fun, creative choreography, outstanding cuing skills and tons of charisma, Steve lives in Barcelona, Catalonia. On his ZINTM page, he says he “absolutely love teaching Zumba classes. The reason is simple: Every class feels like a party!”

You can get a chance to meet and party with these two amazing Zumba superstars in Winnipeg on October 18 at Petrus Hall, 2624 Inkster Blvd. The party starts at 6:00 p.m.

Part of the proceeds will be donated to Building A New Church of St. Peter’s Church.