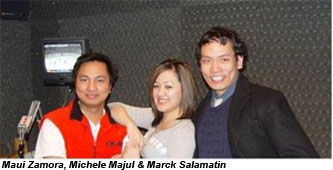 A little more than year ago, Michele Majul and I were off the air. I left The Best of Filipino Music in 2004 while Michele was last on-air with Gising, Winnipeg! and Tunog Pinoy Pang-Sabado sometime in 2006-2007. Both of us temporarily put our radio gigs on hold to pursue other careers.

Meanwhile, Pinoy Saturday Night, hosted by Ayen Dandan Zamora (or Maui Zamora), consistently produced a loyal following of listeners in Winnipeg and around the world through live streaming on www.ckjs.com.

Many people may not realize that the close friendship between the hosts of PSN Community Connect goes beyond when the microphones are turned off. The group’s early connections were made when Ayen was a relative newcomer to CKJS 810 AM, working alongside the veteran voices of Emmie Joaquin, Joe Sulit, Rey Pacheco, Jimi Cruz, Lito Taruc, and others. Michele entered the Filipino radio scene after her triumph as the Adult Grand Champion in the 1997 CKJS 810 AM Tuklas Talino singing competition. Maui was hosting the Night Flight and subsequently became the production engineer. I was initially a sound technician in 2000 before I was given the opportunity to host the weekend midnight program, The Best of Filipino music in 2002. The four of us crossed paths one way or another in Tuklas Talino’s production sessions and we even co-hosted a few shows together – Ayen and I were on Good Morning Philippines, Ayen and Michele on several programs, and I had a one-time, Gising Winnipeg episode with Michele. Little did we know what was in store for us. 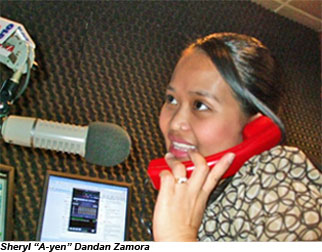 It was in a chance conversation in early 2007 between Ayen, Michele, Maui, and me that the idea was born to have a show that truly reflects the dynamic character of the Filipino community in Winnipeg as well as around the world. There were discussions on whether to have a separate program from what Ayen and Maui were already doing or to incorporate the new show with the current program, which had already enjoyed a tremendous amount of success over the years. Ayen with Maui generously welcomed Michele and me to join them in the show every last Saturday of the month in the regular slot of Pinoy Saturday Night.

On May 26, 2007, the first ever PSN Community Connect Radio Program aired. (Ayen coined the phrase “Community Connect” during a brainstorming session). Ayen, Michele, Maui, and I made a commitment to work extremely hard towards a common goal. We were determined to have a radio program that is both entertaining and would help our listeners become more informed of the issues around them.

For the past year, we’ve had a number of local and international kababayan’s as guests to share with us their insights on various issues.

We are very grateful to our audience for listening and we will continue to work hard to serve our global Filipino community in the best way that we can!

From all of us at PSN Community Connect – Ayen Dandan-Zamora, Michele Majul, Maui Zamora and me, Marck Salamatin – maraming salamat.