Since the phenomenal rise of boxer Manny Pacquiao to global stardom his life has been put under a microscope. He has been praised by supporters and criticized by detractors. Nevertheless, it is undeniable that many people view what has been documented about Manny Pacquiao as a microcosm of the ideal Filipino spirit – his dedication to hard work in perfecting his craft, his sense of family and community, and his sense of humility and compassion.

In a recent interview with Jeremy Schaap of ESPN’s E60, Pacquiao stated, “Before (the 2003 fight with Marco Antonio Barrera), I only trained for one month… it’s not enough. My name is getting bigger in the United States... I have to prove to show them that I’m the best fighter.” In fact, long-time trainer Freddie Roach who has guided many world champions (such as Mike Tyson, James Toney, Bernard Hopkins, and others) considers Pacquiao’s work ethic as the best he has worked with.

Meanwhile, Pacquiao has always remained close to his roots, his sense of family and community. In a profile on HBO’s 24/7 series leading up to his fight with Dela Hoya this month, there was a touching scene where he enjoys a proud moment with his wife, Jinky. Together they were listening to heartbeat of their unborn child.

He still lives in Mindanao where there is a high risk of rebel insurgents, although, it has been revealed that he maintains a security force of thirty men and more than a hundred M16’s at his residence. 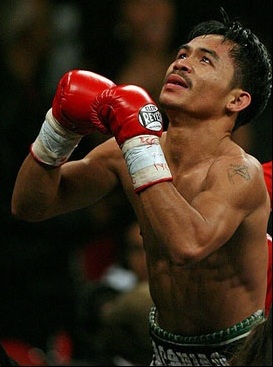 Pacquiao’s charitable works are evident all over the country. He has donated money to hospitals, educational programs and has helped to raise funds for victims of natural disasters. He has even personally distributed food and other items to the poor. In 2005, Pacquiao apparently gave away 35 truckloads of rice with canned goods, eggs and noodles in the Philippines.

While training for his upcoming fight against Oscar Dela Hoya in the United States, Pacquiao gave away 500 turkeys in historic Filipino Town in Los Angeles.

According to Fightnews, he said, “I have a lot to be thankful for and I can’t think of a better way to express my appreciation to my American-based fans who have embraced me, than by sharing my good fortune with them.”

Pacquiao’s success does not seem to have changed the humble man who at one time was selling doughnuts in the streets of General Santos City. In many of his fights, he has sounded more like an diplomat than a warrior; praising his defeated opponents more often than not. This past June, millions witnessed how Pacquiao immediately made an effort to encourage his fallen rival, David Diaz, off the mat.

On the other hand, there have been some criticisms of Pacquiao. Some bloggers have demanded that he should set up a more formal charitable foundation to have a better systemic process of “sharing his blessings.”

Many did not welcome his initial foray into politics, either. Even former boxing rival, now good friend, Eric Morales was quoted in an article by Nick Giongco of the Manila Bulletin saying, “You can provide more help to the people when you are on the outside.”

In a 2006 online commentary, Manny Pacquiao is a boxing icon – Should he be more? Charrisse Domingo wrote, “Philippine politics has corrupted the best-intentioned people and I would hate for Manny’s fighting spirit to be claimed in the name of more McDonalds, Starbucks and golf courses in the Philippines. So as a nation holds its breath waiting for Manny to answer its political invitation, I hold mine too, hoping to God he says no.”

Despite the criticisms hurled at Manny Pacquiao, his life provides an excellent glimpse into the ideal Filipino spirit. While I personally find it challenging to consider him a national hero, he is a great Filipino – an ambassador of our people to others around the world. Who are we to judge the amount that he’d like to donate towards his charitable works? Would we do the same if we were in his position? Why should we criticize an individual who seems to have the best intention of his countrymen in mind?

Perhaps, the biggest lesson that we can learn from Pacquiao’s journey is just to be ourselves. Let’s continue to work hard and be resilient. Let’s always remember and cherish our roots, which are our family, our countrymen, and former home, the Philippines. As much as the situation allows it, humility and compassion in dealing with others goes a long way.

Marck Salamatin, BSc. (Maj.), RN, BN is a Registered Nurse working for the Winnipeg Regional Health Authority. He currently co-hosts the “PSN Community Connect Radio Program” every last Saturday of the month from 9 pm to midnight on CKJS Radio 810 AM. Visit the show’s profile on facebook.